South Rim Viewpoints: There are over 19 points at which you can stop and take in the breathtaking scenery at the South Rim. There are, however, highlights among these that shouldn’t be missed.

Named for the first director of the National Parks Service, Mather Point is maybe the most frequented of the Grand Canyon viewpoints. This is largely due to its proximity to the entrance, however don’t let the crowds dissuade you. Mather Point offers amazing views of Grand Canyon highlights like Vishnu Temple and is often visitors first look at the drama they came to see.

From Yavapai Observation Center you can take in unobstructed views of the Colorado River running through the canyon. If hiking all the way down isn’t your thing, from here you’ll still be able to take in Bright Angel Canyon and the North Kaibab Trail as they snake down to Phantom Ranch at the bottom. 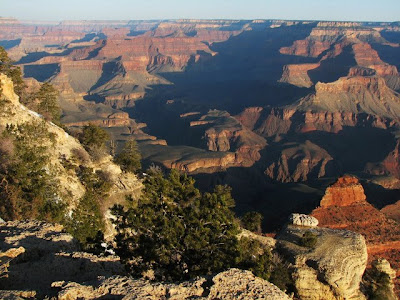 If you’re a morning person, its unique east and west vistas mean Yaki Point is the spot for sunrise. It’s only accessible by shuttle bus so make sure you check the schedule if it is on your to do list. Yaki Point provides views of Bright Angel Trail, Tonto Trail and closer still, South Kaibab Trail. It was named after the Yaqui Indian tribe slaughtered in the early part of the last century.

The westernmost viewpoint on the South Rim, Pima Point offers a stunner of a view, particularly of the Colorado below. Just a little further west and you’ll come to Hermit’s Rest where the architecture is the draw but the view is much less dramatic.

Like Hopi and Pima Points, Mohave is named for a Native American tribe once found in the area. One of the most dramatic rapids of the Colorado, Hermit’s Rapid, is visible from here as are some dramatic views of The Abyss. This is a great sunset spot so get to the shuttle in time not to miss it. You won’t be disappointed. This is the northernmost viewpoint on the South Rim and because of that, the western views stretch on and on. Another great sunset destination, get an early seat as it’s also the most popular. Several of the stone temples can be seen from here so pull out your guidebook and see if you can spot them. Named for John Wesley Powell, the first Colorado River explorer, Powell Point lies not far from Maricopa Point. Here you can find not only dramatic views but a granite memorial commemorating Powell’s two expeditions through the canyon. The first stop on Hermit’s Road leading to all points west, it overlooks the remains of one of the several Grand Canyon uranium mines. The sweeping views encompass parts of Tonto and Bright Angel trails and a good look at the Colorado River below.

Continuing east you’ll find Grandview Point, the most southern viewpoint on the east/west route on the South Rim. It’s also one of the highest in altitude. Gentler slopes lead you down Grandview Trail, not surprisingly found here. Before El Tovar was built, Grandview housed the bulk of the tourists that came to the Grand Canyon. But after the luxury hotel was built, it’s own became less popular and finally shut down in 1908.

If Mary Coulter is the architect of the Grand Canyon, Thomas Moran is its painter. After his initial visit on one of John Wesley Powell’s expeditions, Moran spent over 20 years studying and painting the canyon. Likely named for him because of its dramatic and colorful views, Moran Point is well worth the stop.

An adventurer’s delight, Papago Point, although difficult to get to, is worth the effort. Some bravery is required as getting there means steep drops, narrow trails and scaling the side of the canyon, but once there, you’ll be grandly rewarded with one of the best views on the South Rim. Only you and the condor get one this good as very few tourists take the challenge.

Connected by an east/west trail through the woods, Pima and Lipan Points provide sweeping views that encompass miles of the Colorado and one of the best locals to examine the stratification in the layers of rock that visually signify millions of years. Lipan Point is not far from Tanner Trail if that’s on your list and both have excellent views of Escalante Butte. 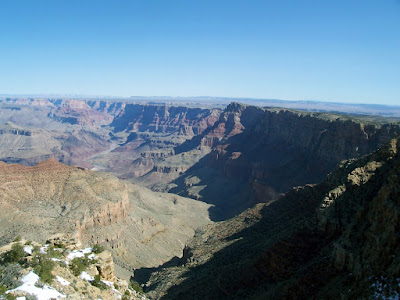 The highest point on the South Rim, Navajo Point is an excellent choice for a sunrise destination. Only a half a mile from the terminus viewpoint, Desert View, you look out over the Colorado River’s big bend area. Huge views and easy access from Desert View Drive make this a great lookout point for those wanting to take it a bit easy.

Home of Desert View Watchtower, another feat of famed architect Mary Coulter, Desert View is the terminus point on Desert View Drive. Add gorgeous views of the Painted Desert and the Grand Canyon itself and it being the first stop for those traveling from the east make this viewpoint one of the most popular